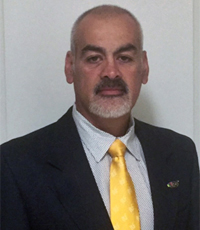 Master Fabian Nunez
President
No. A-8-15

“My goal as President of the OTFA is to unify the USA and work towards assisting everyone with their goals and aspirations in Taekwon-Do. The OTFA will be expanding and asking all to participate in this endeavor. As well as setting up multiple committees’ that would allow participants to get involved and make a difference. Granted with years of experience and education from General Choi on the technical side of Taekwon-Do. Along with holding presidency of the ATFI for 18 years, coaching team USA, and having 31 years of experience being a full time instructor, I will do my best to help the OTFA become the leading ITF Taekwon-Do organization in the United States. I hope to be able to count on the assistance of our excellent Grand Masters, Masters, Instructors and Students on this journey.”

Since December 2009 Master Nunez has held the ITF certified rank of an 8th Dan [A-8-15]. He has taken part in training under the ITF Taekwon-do organization since January of 1973. His background also includes training in MooDukkwan, Judo, and a professional kickboxing career with a record of 23-2 ending with a WKA World Kickboxing title. But he has always centered his focus on Taekwon Do and used this gained knowledge to become a successful martial artist, instructor and coach.

Master Nunez has been both a National and International competitor, winning gold, silver and bronze medals at the ITF World Championships in Greece (1987) and Canada(1990). Along with wining Gold at General Choi’s Cup(Puerto Rico) in 1985 and gold again in New Zealand, the South Pacific Championship in 1985, and the USTF National Grand Championship in 1989.

Master Nunez has taken the knowledge and experience gained from his years as a student and competitor and used it to coach the USA Team in numerous ITF World Championships and International competitions. Master Nunez has coached individuals (juniors and adults) and teams (women and men) to regional and national championships as well as international and World competitions, medaling in both. He has also trained kick boxers going to state and regional championships.

For more than 40 years, Master Nunez has worked as a student, competitor, coach, referee, Instructor, Regional Director and President  in all major Taekwon-do competitions and events throughout the USA and abroad. As well as focusing his time and energy on conducting Sparring, Self-defense and Pattern seminars as well.

Master Nunez has had the privilege to train, travel and assist Gen. Choi in seminars and IIC’s in the USA and aboard from 1984 -1999.  Since the passing of General Choi, Master Nunez has continued training and conducted technical seminars across the United States, spreading the art of Taekwon-do to all.

Master Nunez is known throughout the National and International Taekwon-do community for his leadership, knowledge, technical ability and kickboxing skills, all of which will help to serve the OTFA and its members both now in the present and far into the future.